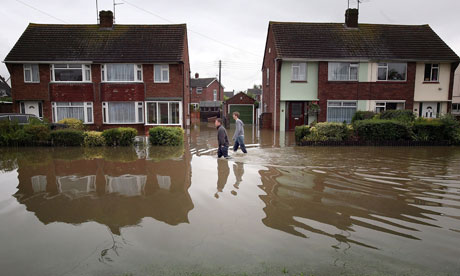 Householders whose homes have previously been flooded are seeking advice in record numbers over fears they will not be able to buy insurance from July onwards.

Householders whose homes have previously been flooded are seeking advice in record numbers over fears they will not be able to buy insurance from July onwards.

The National Flood Forum (NFF) charity said the number of calls to its helpline trebled in the past year, with some callers reporting huge rises in the cost of their cover, and others saying they were unable to sell their properties.

The calls are increasing as the end of an agreement between the government and insurers approaches. This agreement, known as the “statement of principles”, obliges insurers to offer flood insurance as part of standard household policies at reasonable rates, providing the government invests in flood defences. So far ministers and the industry have been unable to reach an agreement about what happens next.

The NFF said it has seen growing numbers of households getting in touch because they are struggling to sell their properties while it remains uncertain whether or not a new buyer would be able to get buildings insurance.

“I am sure everyone agrees that it is not government’s business to support house prices, but you cannot ignore the likelihood of a significant markdown in value for perhaps 200,000 properties across the country,” NFF chief executive Paul Cobbing said.

“Others are contacting us because their insurance premiums have been jacked up by ridiculous amounts, while a third group is telling us that insurers are now asking them for lots of extra information before they will renew their cover. This is despite the fact that under the ‘statement of principles’ an insurer has to continue to offer cover on renewal.”

Cobbing said he had seen some householder’s premiums double to £2,000 a year, and in one case a small business saw its premium rise from £4,000 to £25,000 a year. He was speaking to the Guardian ahead of the UK’s first conference dedicated to flooding, taking place in York on 10 May 2013.

“I am really worried that the government and the insurers have not reached an agreement,” Cobbing said. “My understanding is that the decision is being held up by one or two key individuals – but the consequences for households is huge.”

The insurance industry, supported by the NFF and a number of cross-party MPs, wants to introduce a levy on insurance for all policy holders of about £8 in order to create a £150m-a-year fund to cover those at high risk of flooding. But the government is understood to be reluctant to provide any additional funding that could be required on top of this in the case of extreme flooding.

One alternative – resorting to a free market – would essentially mean insurers could charge what they like, and many householders would find themselves in effect unable to obtain insurance.

Anything else would require legislation – something that is increasingly unlikely to go through before parliament’s summer recess.

Also speaking at the conference, Matt Cullen, the Association of British Insurers’ policy adviser on flooding, said: “If a single large insurer decides to stop offering renewals to is high flood risk properties, it could leave thousands of properties struggling to find a new insurer.”

He unveiled figures that showed the likely impact on household premiums of moving to risk-reflective prices, as would happen within a free market. At present, 75,000 homes pay £500 or more a year for their insurance. Under a free market this would increase to 650,000 homes. At the very top, the number who currently pay more than £2,500 for their insurance would rise from 1,200 homes to 4,000.

Lisa Bachelor
guardian.co.uk © 2013 Guardian News and Media Limited or its affiliated companies. All rights reserved. | Use of this content is subject to our Terms & Conditions | More Feeds